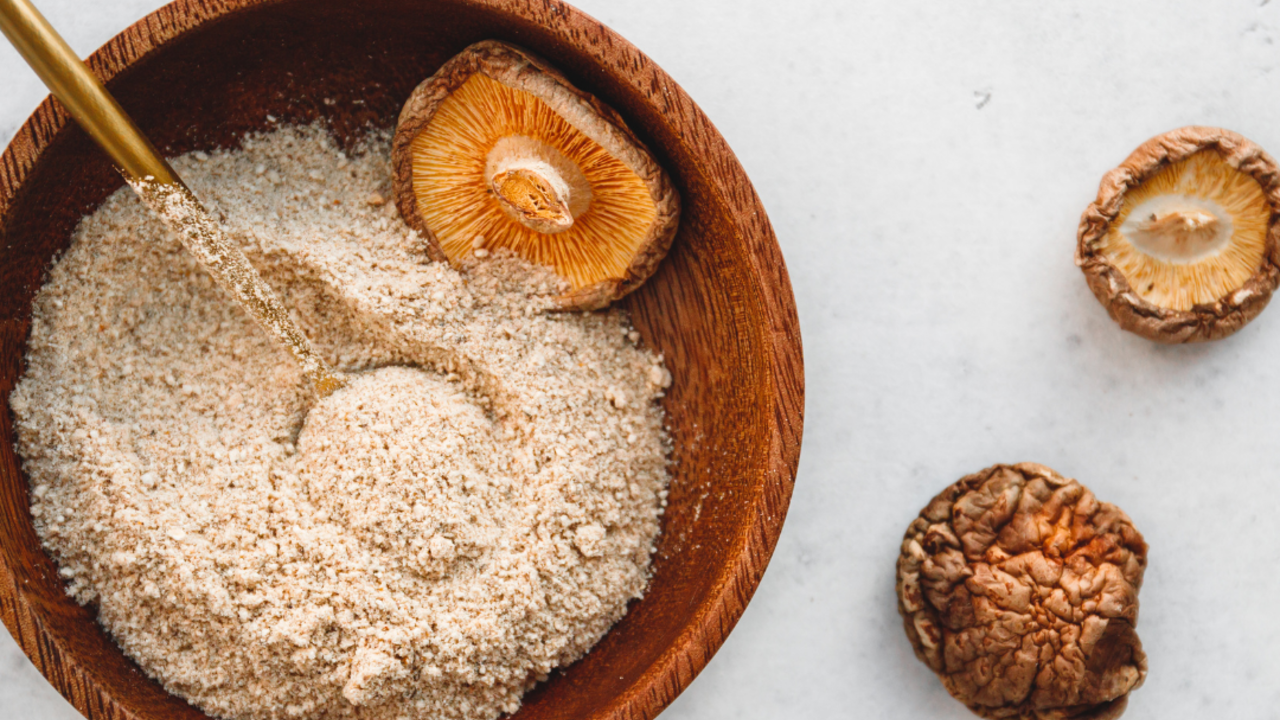 Mushrooms used to be considered more of an acquired taste, but now they are in absolutely everything ranging from coffee, to chocolates, to smoothies, to seasonings, to supplements.  They’re a hot topic and everyone is talking about them - but why?

Mushrooms have been used in cuisine and medicine for thousands of years. They were a staple among our ancestors, mainly for their health-enhancing properties, although this knowledge has since been lost to the general public. Each fungi is unique and has its own powerful potentials:

Here's a breakdown with some scientific studies - please note this article is for general education only. These benefits have not been confirmed by the FDA and cannot yet be considered to be therapeutic, more studies are needed. You must always check with your doctor before starting any medicinal mushroom extracts, as these may not be suitable for certain groups like pregnant/children, and have interactions with medications.

Reishi, also known as Lingzhi, has been shown to boost the immune system, have been shown to possess antiretroviral properties, and have the most potent antioxidant activity in a study of 14 different mushrooms. In vitro studies have indicated reishi may boost the immune system by increasing natural killer cells that target tumors and microbial infections, and both in vitro and in vivo studies have suggested immunomodulatory effects, such as promoting antigen-presenting cells, which are responsible for executing the cellular immune response. Purple reishi has also been found to strengthen certain pathways involved in the immune system’s inflammatory response. A meta-analysis showed that patients who ingested reishi in addition to chemo- or radio-therapy were more likely to respond positively to treatment compared to chemo- or radio-therapy alone. Another study proposes a potential mechanism where reishi may help increase white blood cell concentrations and enhance immune response in patients with advanced-stage cancer, although healthy individuals showed no significant improvements after four weeks of Reishi supplementation. Nobody is claiming magic cures here, but researchers are investigating the role some of these medicinal mushrooms may play as an adjunct to conventional treatments. While reishi may bolster the busy immune system, it seems to have sedative effects and a sleep-promoting factor that could be useful for sleep disturbances, insomnia, and stress reduction. I like adding a little to my night time beverage, be it a tulsi/lemon balm tea, or a hot cocoa.

Lion’s mane gets all its attention for cognitive functioning, as well as immunity. Here’s some food for thought (pun intended): a small double-blind placebo-controlled study that participants with mild cognitive impairment consistently taking lion's mane for four months showed significant improvements, which increased with duration of intake, but significantly declined once supplementation stopped. Another randomized, double-blind, placebo-controlled study found that taking supplements for 12 weeks showed significantly improved cognitive functions and prevention from deterioration based on three different types of cognitive tests. Researchers have also speculated this may be a result of the lion's mane potential to stimulate growth of cells in the brain responsible for neural signaling.

This shroom seems promising for not only the brain, but also the body with its high levels of antioxidant properties. Lion's mane’s ability to inhibit inflammation of fat tissues could help with obesity, and also may indicate potential anti-inflammatory properties that could boost the immune system. Although the effects on immunity have not yet been researched in humans, animal trials indicate that lion’s mane increases cellular activity in the intestine - The largest organ involved in the immune system, which handles all pathogens that enter the digestive tract. Lion’s mane also influences the composition and metabolism of gut microbiota, which could improve immune function by activating “T” cells that fight infections. Animal studies once again support this: in mice exposed to bacteria, ingestion of lion’s mane increased their white blood cell count and increased their lifespan. More studies in humans must verify this, but the mechanism seems promising.

Chaga, a mushroom popular for its strong antioxidant activity, has the ability to protect cells from oxidative stress for both healthy individuals and those with inflammatory bowel disease. Oxidative stress can cause cell damage and aging, so this immune enhancer is also being investigated as an adjunct in suppressing tumor growth and providing additional support to patients undergoing chemotherapy. Chaga has also been found to play a role in the immune system's response and antibody production to fight off bacteria and unwanted pathogens that enter the body. Studies in mice have indicated that Chaga likely has a role in mediating and the body’s inflammatory response and inhibits the production of harmful cytokines in the body that produce unwanted inflammation.

Turkey Tail has many caps; it is currently being studied in combination with standard therapy for certain cancers and also has proven to be beneficial for gut health. One study found that Turkey Tail extract contained 38 antioxidant components, which is key for protection against cell damage and such cells turning into cancer. Among these are certain phenol and flavonoid antioxidant compounds, which support immune health by reducing inflammation. Turkey Tail also contains polysaccharopeptides, which facilitates increased production of white blood cells that fight off infections in the body and enhances the cells that fight off cancer. In fact, a study indicated that people with breast, gastric, or colorectal cancer who were treated with Turkey Tail in addition to chemotherapy had a survival advantage over those treated with chemotherapy alone. Another supporting study of women with breast cancer found that the women who ingested several grams of Turkey Tail power daily in addition to chemotherapy had increased numbers of cancer-fighting cells in their immune systems.

Specific evidence has also been found to support Turkey Tail’s role in gut health. Daily consumption of Turkey Tail seems to effectively modify and improve gut bacteria composition by suppressing growth of problematic bacteria, such as E. coli, and increasing beneficial bacteria, such as Bifidobacterium and Lactobacillus, which have been linked to improved intestinal issues, digestion, immune system function, and reduced cholesterol and risk of certain cancers.

Maitake contains immunomodulatory properties and has been found to stimulate cellular and hormonal immune functions. It is also among mushrooms with the highest antitumor activities. Mechanistic studies have shown such anti-cancer properties, and there are preliminary clinical trials showing it can have benefits when combined with conventional cancer treatments in breast, lung, gastric and colorectal cancers. The mechanism behind this has been researched and hypothesized using human breast cancer cells, which indicate that maitake stimulates death and inhibits growth of these cells. Maitake, when ingested with a cancer-fighting protein, has been shown to elicit greater cell death of a variety of cancer cells (pancreatic cancer cells, peritoneal carcinomatosis, and renal cell carcinoma tumors) than what was achieved with just the protein in cancer patients. Many researchers and doctors are continuing to research maitake and its anticancer potentials.

Cordyceps is the final mushroom that we will talk about today, but certainly not the one with the least benefits. Cordyceps is a very niche mushroom, best known for its effects on exercise endurance and lung health, making it popular to study among athletes. Studies have shown that this mushroom may improve exercise performance, thought to be mediated by increased ATP production, which is the main source of energy for the body when it is being exerted. A 3-month trial showed that supplementation of cordyceps with reishi helped protect amateur cyclists from oxidative stress, decreased performance, and being unable to recover from overtraining. Another study with healthy, olderly people indicated that the participants who consumed cordyceps daily for six weeks had increased aerobic capacity, respiratory function, and fitness levels, while participants in the control group showed no change.

Studies with healthy, young adults have shown similar results. However, cordyceps consumption or supplementation has shown to have no effect on endurance-trained athletes, indicating that more benefits may be reaped for more amateaur athletes.

No matter your athletic ability, cordyceps may still benefit your respiratory health. A clinical trial showed asthma patients treated with cordyceps have demonstrated more improvement in a shorter amount of time than others treated with conventional antihistamines. Another study has found that asthma patients who regularly ingested cordyceps in addition to standard treatment experienced a significant increase in quality of life, improved lung function, and decreased inflammation compared to those who simply used standard medications. While this does not mean that asthma can simply be treated with a mushroom, it does highlight some potential anti-inflammatory properties of cordyceps and some potential added benefits.

If you are interested in adding some fungi to your diet, it may be overwhelming to try to find the right brand or product since there are so many out there. In order to truly reap any benefits mushrooms may provide; it is important to know what distinguishes a genuinely good mushroom product from a misleading one. The most important thing is to read the label.

Here are some things for you to consider:

I personally like and use Real Mushrooms, they are transparent and provide high-quality products. My favorite products from them are the 5 defenders which I add to my soups/broths a lot, the reishi which I add to my evening beverage, and chaga which I sometimes add to my food.  Use code ‘Platefulhealth10” for 10% off your purchase.

Another brand which I like is Life Cykel - if you do not like the taste of mushrooms this one might suit you, as it is pretty 'tasteless' as a tincture. I often add these to my matcha or just some water and drink it. Use code: ‘Platefulhealth” to save 10% off!